Plans are underway to construct a brand new Stillwater American Legion hall in the village, a facility that would be twice as large and offer 3,000 square feet of space for weddings and functions.

Edwin Burmaster, Commander of the Earl J. Manning American Legion Post 490, updated the Village Board of Trustees on the project March 20. Burmaster explained that a new 5,200 square foot legion would replace the 2,500 square foot building that stands now adjacent to the village ice rink and ball fields. 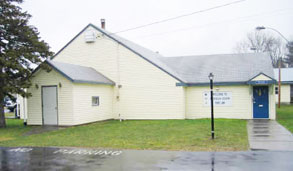 Once the one-level facility is constructed, the old legion would be torn down and a parking lot would go in its place. The new facility would offer a drive-up, drop-off area for cars. The road that exists there now would also be moved because it’s become a safety issue with children playing at the nearby parks, he said.

“A banquet hall and bar will make up a majority of the new building,” Burmaster said. “I think it will be a great addition and give Stillwater a new modern facility for banquets, weddings and get-togethers.”

The legion has been busy with fundraisers to help supplement the cost of new construction. At one time, the group had considered adding on to the existing building in phases but ultimately decided a new building would better meet their needs, Burmaster said. The basement of the existing legion often floods during heavy rain storms.

In the meantime, the legion secured a $200,000 state grant to finance a majority of the project, and members have raised another $18,000 toward the cost thus far. The pricetag on the new facility is unknown at this time but officials estimate it could be anywhere from $250,000 to $350,000. The legion has hired an architect and is getting estimates from contractors.

A timeframe for construction is also unknown as final paperwork for the grant money would have to be approved by the New York State Senate and signed by the Governor.

“Ideally we’d be looking at the end of May or beginning of June to break ground if everything goes right,” Burmaster said. “The building could possibly be up by November.”

Village Trustees voted unanimously to waive the traditional building permit fees for the project because the legion is a community “help” organization. Village permit fees would total about $1,555 for a project this size.

The American Legion was chartered by the United States Congress in 1919 as a not-for-profit patriotic veterans organization, focusing on service to veterans, service members and communities.