Stillwater village residents may soon have a place to grow their own fruits and vegetables if area planners get the financial backing to start up a community garden project.

Plans for the community garden were unveiled before the village Board of Trustees in February by Stillwater Area Community Center Executive Director Madeline Patterson, who said her staff is applying for grants to fund the initiative.

A community garden is a section of land broken up into a variety of plots rented by individuals at a “nominal fee,” Patterson explained. The concept has been successful in many small villages and large cities where homeowners or renters may not have the space in their yards to establish their own gardens.

With a community garden, participants work together to prepare the soil as a whole in the spring, and share tools and a watering source. Each individual gardener is responsible for maintaining his or her own plot through the growing season and keeping from becoming unsightly. 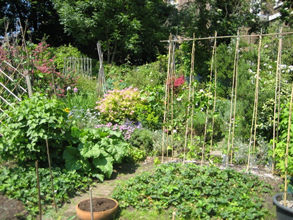 “In addition to bringing neighbors together, research has shown that community gardens have increased property values for homes within walking distance of them,” Patterson said. “It also gives families an opportunity to grow and eat healthier foods and save money at the grocery store.”

Community gardens have been successful in nearby Round Lake and at 48 other locations in Albany, Rensselaer, Saratoga and Schenectady counties under the umbrella of the Capital District Community Gardens of upstate New York, she said.

Planners envision establishing the garden on mainly town land near the tennis courts and baseball diamond below the community center. Each garden plot would be four feet wide by 24 feet long set up in two rows of eight — making 16 plots in all. If the project goes well more plots could be added in the future. A six-foot fence would surround the garden and security camera would be mounted on nearby buildings to protect it from vandalism.

Because the garden would be close to wetlands, organizers would need a permit to proceed with the project from the U.S. Army Corps of Engineers, which planners believe will be a “formality.”

Mayor Ernest Martin said his only concern from the village’s standpoint is that the proximity of the garden does nothing to affect water flow into a drain ditch crews have spent “a lot of time and money on” to protect nearby yards on Lake Street from flooding during heavy rain runoff.

Organizer said they would discuss putting in culverts to prevent that from happening as planning for the project moves forward.
Depending on the ability to secure grant monies, the project could get underway this growing season or by the spring of 2014.

The community center staff would like to tie the project into new educational program offerings on gardening, healthy food preparation and other classes.