The Stillwater, New York, fire station was destroyed by fire in 1896. Thanks to quick action by Al Pack, the department’s 1871 Button steamer pumper and an accompanying hose cart were pulled safely from the flames. Now the steamer has been restored and is a regular feature in parades and fire musters in upstate New York.

Stillwater is a village of approximately 2,500, located on the Hudson River, some thirty miles north of the state capital at Albany, New York. The community’s fire history dates back as early as 1777. In 1865 the first organized fire department at Stillwater was formed. In 1875 the department purchased a used 1871 Button 700-gpm steamer that had served Troy, New York. The Button factory at Waterford, New York had gone over the rig to assure a like-new delivery. Had it not been for the actions of Pack some twenty years later, the “jewel” of the department would have been lost forever.

The steamer continued to serve the community into the 1920s. Then the first motorized fire apparatus came on the scene. A 1922 Ford and a 1925 White fire apparatus took the place of the long-serving steamer. The Button became a display and parade piece over the next several decades. Time and lack of proper storage took a toll on the appearance and condition of the steamer. In the early 1990s, members of the department became interested in restoring the rig. The nickel plating and the condition of the wood spoke wheels were major concerns. The membership sought donations from the community and established fundraisers. One of the fund raisers was the “Restore Our Steamer” annual car show, held the first weekend in May. The fundraiser continues to be an annual event. Funds continued to trickle in for the next decade. In July 2000, then Assemblyman Robert Prentiss, of the New York State Legislature, secured a grant from the state in the amount of $25,000 for restoring the steamer. 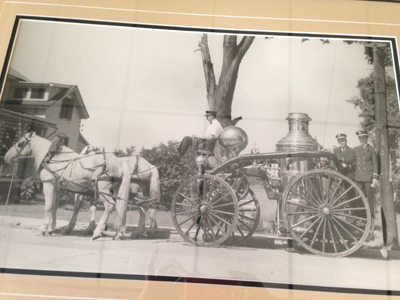 Wilde Fire Equipment Company, in Mayfield, New York, spent the next two years restoring the Button steamer. It disassembled, repaired, restored, and reassembled each piece of the machine. Because firing the boiler would result in nickel plating discoloration, the group decided not to bring the boiler back to operating condition. There are also very strict guidelines, inspections, and certifications in place for opeating steamer pumpers and any other steam-powered apparatus. The Button would be strictly a display piece. Chief Jeff Mahar estimates that the restoration costs were close to $50,000.00. Replating the nickel on the boiler and other bright work on the unit was the largest expense. Local Amish experts examined the wheels and found them to be in much better condition than feared.

Today the Button appears area parades in cities and towns along the Hudson River. The steamer has won many awards for being the oldest in show. Although awards are nice, Mahar says that the most important feature is to be able to share the department’s piece of firefighting apparatus as it relates to history going back almost 150 years.

The steamer has moved around to several different locations over the years for storage and display. The fire station is full of front-line apparatus that is a part of the 30-member department. Recently, the department made an arrangement to house and eventually display the Button at an abandoned city water plant in Stillwater. Although a new home is good, there now is the need for updating and proper climate control in the building to assure no deterioration to the steamer. Heating and cooling units are major expenses. Now we know why that early May car show continues to be a main event in Stillwater. Mahar shares that there is enthusiasm by all the car enthusiasts in the area to get their vehicles out for the first show of the year. Being that far north in upstate New York can and does bring a variety of weather conditions. Snow can be in the picture. Although it may take a couple of years to get the building ready to properly show the steamer, Mahar invites anyone interested in stopping in to see the apparatus to contact him to make arrangements.

Owning any piece of vintage fire apparatus is an expense and a responsibility. Maintaining or restoring an apparatus has many rewards that go right along with the expenses. It is good that communities, fire departments, and individuals appreciate what vintage fire apparatus bring to the rich history of an area. Although this feature covers the story of an 1871 steamer, I just received a series of pictures from Germany where an event this summer brought together several pieces of hand drawn pumps that served various departments in Germany. The members of the departments dressed in the appropriate uniforms for that time, and the pumpers went to work. Some of the units were well over 150 years old. Amazing!