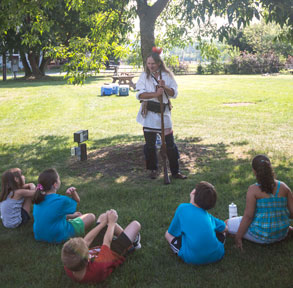 Children from the Stillwater Area Community Center’s summer enrichment program had an opportunity to visit the Stillwater Blockhouse recently and learn a little about the history of the area.

The children were broken up into groups and spent time at five different educational stations.

The first station was manned by Phil Colarusso, Commander of the 13th Albany Militia. Colarusso has build a number of 18th century ships, such as the  Thunder and the Philadelphia, as well as a British War ship. He demonstrated for the visitors the ships’ miniature cannons, rigging and sails. 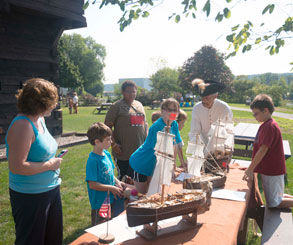 Next, at station No. 2, the children got to experience a “drill  out” on the field just like the 13th Albany would have done during the 18th century. They were drilled and taught hunting skills by Jim Peacock and Josh Canary .

Station No. 3 was manned by Native American Chip Perry, who explained what it was like for early natives of the area to live during French & Indian War times.

Newest Blockhouse recruit, Don Porter, portrayed a Highlander at station No. 4. Porter taught the children about the involvement of the “Scotts” in the shaping of our history while he entertained them by playing the bag pipes.

The children concluded their outing by visiting the inside of the Blockhouse where Town Historian Linda Palmieri took them on a tour of the extensive artifacts collections, which contains maps and weapons from the French & Indian Wars and Native Americans history. The children also spent time going through the Veterans display looking for pictures of family members.