The Stillwater Board of Trustees vote April 19 to trade in its two-year-old mini excavator the Department of Public Works no longer uses for a different piece of heavy duty equipment designed for many uses including removing snow from village sidewalks.

The new vehicle is known as an on-track skid-steer — a small, rigid-frame, engine-powered machine with lift arms used to attach a wide variety of labor-saving tools or attachments. Those attachments include a loading bucket, a snow blower and tilted arm for blowing snow into trucks for easy removal, and a cold planer for milling asphalt/blacktop. A cold planer is a machine that uses a large rotating drum to grind and remove the road surface. 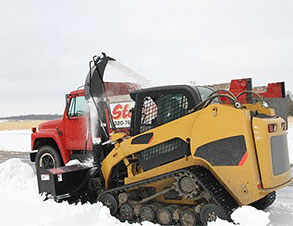 In May of 2014 the village purchased an excavator and various attachments for $110,000 from a CAT dealership. The hope was that DPW crews could use the excavator to take on large digging projects like repairing underground water and sewer lines.

But since that time, the village has decided to continue contracting with outside vendors for this type of work. The village advertised for the sale of the excavator many months ago but no one has come forward to purchase it.

Trustee Timothy Campbell had been negotiating with the same dealership to trade in the excavator for the new equipment called a CAT Compact Track and Multi Terrain Loader. The cost of the new machine is about $101,000. The village will receive a trade in of $86,000 for the excavator, spending an additional $15,000 on the new loader and snow remover.

“We’re basically getting rid of a piece of equipment we don’t use and getting one we will use,” said Mayor Rick Nelson.
Campbell said the village should receive the loader is a few weeks.

In other business, a group of Ferry Lane residents asked the mayor and Trustees to take a tour of their road to witness firsthand its potholes and poor condition. The residents claimed the village has failed to listen to their concerns in more than a year and they are “annoyed” by it.

Mayor Nelson said the village is aware that several roads are in need of repair and Trustees have assembled a list prioritizing those in the greatest need. He added that the village must rely on state funding known as CHIPS money (Consolidated Local Street and Highway Improvement Program) to pay for the work.

“I’m not blind to this but it comes down to money,” Nelson said. “It frustrates me too that we can’t rebuild all of the roads in the village but we have to be diligent and deal with what we can. I drive all of the roads in this village and I am aware of their condition. I’m not happy about it but this is the hand we are dealt with.”

In other business on April 19: