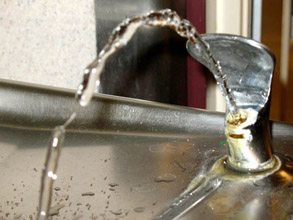 Village water users can expect to receive a $220 rebate check in the mail soon and say goodbye to their yearly EDU water rent charges for good.

The Board of Trustees voted Tuesday (January 20) to issue rebates equivalent to $220 per EDU to all village water users who were subject to EDU charges at the time of the April 2014 water billing. This would affect village homeowners, business owners, landlords or anyone responsible for paying the water bill.

The rebate checks, equal to one yearly EDU payment, should be mailed out in four to six weeks, said Village Clerk/Treasurer Sheristin Tedesco.

Trustees also agreed to amend the Water Regulations and Rates and permanently abolish the annual EDU charge to water users — a provision that was created in April 2012 to help bail the village water budget out of debt.

The water rent increase was needed at that time to help pay off a 38-year federal hardship loan for installing a pipeline that draws water from the Saratoga County Water Authority. The lines were installed after PCBs were discovered in the wells of the village treatment system near the Hudson River and the village water plant had to be shut down.

From the 1940s to 1977, General Electric discharged PCBs into the Hudson River from two upstream plants and the company was ordered to dredge 40 miles of riverbed between Fort Edward and Troy.

The discharges polluted the village water supply, forcing it to shut down its water treatment plant and connect to the SCWA to supply village drinking water. The village joined other river municipalities in filing a lawsuit against GE to recover the money it was forced to spend.

A settlement in the case was reached earlier this year and the village received about $4.3 million from GE. In October, the village used some of the money to pay back the USDA loan it was granted for the capital expenses it incurred to connect to the SCWA.

EDUs were only temporary

Village Mayor Ernest Martin always contended since the EDU system was established that it would be temporary until a lawsuit settlement with GE could be reached. During a public hearing back in April 2012 he told residents that after considering multiple options, the EDU system was the “fairest way to go” for paying back the debt.

“It’s not easy for anyone but we needed this new water line and now it’s time to pay for it,” Martin said. “The Village Board has worked very hard to get this right and to be fair to everyone involved.”

The EDU or Equivalent Dwelling Units formula had been used by other municipalities around the state facing similar financial circumstances. Under that formula, a single family home, which makes up about 69 percent of village property, equaled one EDU. A rental property, on the other hand, could equal multiple EDUs depending on how many “living units” it houses. A duplex would equaled two EDUs, a third-unit, three EDUs, a four-unit, four EDUs and so on.

The village had calculated at the time it had approximately 835.5 EDUs within the village for homes and businesses at a cost of $220 per EDU. That will produce enough income to enable the village to make its annual loan payment of $179,597 on the $3.9 million it borrowed from the U.S. Department of Agriculture Rural Development Agency at 3.25% interest. The loan would pay two-thirds of the $6 million water pipeline project; another third was paid for through grant monies.

Village water users made EDU payments in 2013 and 2014 until the system could now be abolished. One year’s EDU payment will essentially be returned to residents with Tuesday’s vote at a total cost to the village of $187,770. The money will come out of the GE settlement account.

In other action Tuesday, Trustees voted to establish a special reserve fund to pay off a longstanding loan with the New York State Environmental Facilities Corp (EFC). The money was borrowed years ago to make improvements to the village water treatment plant before it had to be permanently shut down from the PCB infiltration.

The last loan payment is due in November 2020. Trustees had planned on using GE settlement funds to pay off the loan now but discovered from the EFC it would cost most in prepayment penalties and the hiring of escrow agents and bond counsels to do so. Instead, the $255,000 in principal and interest will be deposited into the reserve fund and paid bi-yearly until the loan is paid off in approximately five and a half years.