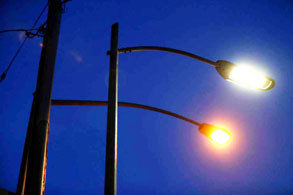 The Stillwater Village Board of Trustees has approved a plan to save taxpayer money by converting its street lights from sodium mercury vapor lights to more energy-efficient LED (light-emitting diode) lights.

Trustee John Basile, who has been studying the option since it was introduced by Gov. Cuomo and New York State Electric and Gas (NYSEG) in 2017, said the village would have to pay the utility company a “retirement charge” of about $10,000 on the old system. But in return, the village could expect to start saving on energy by using the LED lighting within 3-5 years.

“It’s definitely will be an economic benefit for us to switch,” Basile told the Board. “In my mind it’s the right thing to do.”

The Village Board agreed as it unanimously approved the proposal on July 16.

The governor’s office has estimated that municipalities can save an average of $63, annually, per street light, by converting from existing street lights to the newly offered LED fixtures. There are approximately 81,500 such street lights in NYSEG’s service territory statewide.

Furthermore, a New York State Energy Research and Development Authority 2014 study, Street Lighting in New York State: Opportunities and Challenges, found that if a conversion to LED were accomplished statewide, an estimated 524 gigawatt hours of electricity and $97 million would be saved annually.

For many municipalities, street lighting is the single greatest electricity cost in government operations. Beyond saving energy and money, LED technology has superior optics over the older technologies, improving visibility and reducing glare, which helps to make streets safer for pedestrians, cyclists, and motorists.

The street light conversion plan is part of Gov. Cuomo’s strategy to empower communities to have more say over their energy use. Historically, municipalities could only pursue LED street lighting through their willingness to take over ownership of the street lights from the utility, an expenditure and responsibility many communities found they could not afford to take on. But recently, NYSEG began offering the utility-owned LED street-lighting option, enabling municipalities like Stillwater to achieve meaningful cost reductions while NYSEG retains the responsibility for maintaining the street lights.

Taking over ownership of the lighting system would not have been cost effective for the village, Basile said, because it does not have the equipment or manpower to maintain it.

“It just wouldn’t be feasible for us,” he said.

In additional to increasing energy efficiency, the LED lighting program was put into effect to help reduce greenhouse gas emissions in New York’s communities. No timeline was given for the Stillwater conversion. Basile said the village will first conduct an audit of the current street lighting system to determine where “poles need to be added or can be eliminated” to meet today’s needs.