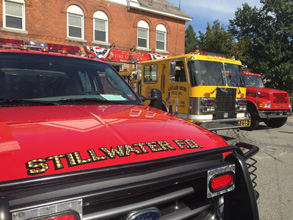 The village has authorized its engineering firm to put a plan together for making needed structural repairs to its aging firehouse at Village Hall.

The wood and brick building’s walls and ceilings are “sagging” in areas and need to be reinforced. The village recently hired a carpenter to “open up” sections of the building so its “insides” could be inspected by a structural engineer.

During a report to the Board of Trustees July 17, Trustee John Basile said the building has “dropped” several inches and is no longer level. The two-bay facility houses the village fire trucks for Newland-Wood Fire Company 59. The department celebrated its 150th anniversary in the fall of 2015.

The village board has authorized paying its engineering firm, Adirondack Mountain Engineering, up to $6,800 to prepare a design for structural improvements to the building. This will involve preparing drawings for the structural reinforcement of the existing wood framed structure within the garage area. The improvements are anticipated to include the replacement of the existing wood girders with the addition of new support columns.

The improvements will also include framing plans for second floor structural modifications necessary to support the overhead partition walls. Options for addressing the existing floor levels will include the installation of shims and/or the replacement of the existing floor joists with new beams.

The engineering plans should take about 30 days to complete. The next step would be for the village to solicit bids from contractors to complete the structural improvements. The repair costs are unknown at this time, Basile said, but it would be cheaper than building a new firehouse.

In other business July 17: