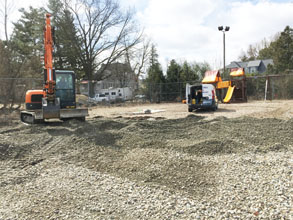 The Village of Stillwater broke ground this week on its new water splash pad being constructed at the park facilities on the American Legion property.

With summer just a few months away, the village hopes to have the splash pad up and running for the warm weather. Crews have begun preparing the site near the village playground to install the water piping, draining and concrete.

The splash pad will be made of poured concrete and feature 24 water jets shooting water upwards from the ground as children run through it to cool off. It would also include a 4-foot surrounding concrete walkway pad (surrounding the splash pad area) and a timer to shut the water off when not in use.

Village leaders have been exploring this and other ideas for upgrading the downtown park area with the vision of creating an active hub of outdoor recreation for Stillwater children and families. The land is owned by the legion but the village oversees the recreational facilities.

Recently, the village secured a $50,000 state grant to help renovate the basketball courts and bring in Project Backboard, a venture they hope to also complete by the spring. Plans are also being discussed to add a pickle ball court and improve the small playground already there. A special village parks and recreation committee is overseeing the renovations.