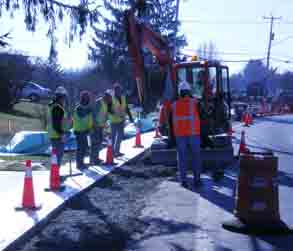 Progress continues to be made on two major village construction projects, the Board of Trustees learned Tuesday night (November 20), upgrading and repairing the sewer system village-wide and installing new sidewalks and drainage along Route 4 near Stillwater Central Schools.

“It’s been quite a busy place around here lately,” said Trustee and Deputy Mayor John Basile. “Last Wednesday there were five areas of the village with traffic down to one lane, and three contractors and one subcontractor working on the sidewalk and sewer projects simultaneously. Things are really moving along.”

The sewer project has been ongoing since last spring when the Village Board awarded $1.8 million in contracts to four lower bidders to make upgrades and repairs this year to the sewer systems in the village and in the town’s Castle Cliffs Sewer District.

The improvements will meet terms of a consent decree issued by New York State Department of Environmental Conservation mandating the capital improvements to reduce the infiltration of ground water into the village sewer collection system.

Work over the last few weeks has centered on the sewer mains, which are being rehabilitated using a method called Insituform.

Basile told the board the repair process is “quite unique” and was interesting to witness. Basically, a long plastic tube is inserted into the existing sewer piping, then expanded with air and steam until it becomes glued to the inside walls. The repaired pipe is now jointless, minimizing root and water infiltration problems, improving water flow, and providing for a more structural sound pipe without the need for excavation.

“We are lucky to find a contractor that can offer us this type of technology,” Basile said. “I think their work is excellent and that’s a big positive for the village. This should extend our sewer life another 30-50 years and significantly reduce the amount of water we have to treat at our water treatment plant.”

The Insituform work will continue over the next couple of weeks and residents, especially on the west side of Hudson Avenue, will continue to be notified door-to-door about interruptions in village sewer service, which lasts about six to eight hours while the process is underway. The final step of the sewer project is to seal around various manholes in the village and do some cleanup work in the spring.

Meanwhile, after years of planning and delay hurdles by state and federal authorities, the long-awaited, grant-funded sidewalk construction project leading to and from Stillwater Central School also got underway in November.

Department of Public Works Superintendent Robert Gerasia said about 300 feet of sidewalk had been laid from the north side of the school entrance at Seton Health Care southward to in front of the school parking lot by Tuesday, and another 200 feet would be added by the end of the week. The project, however, will not be completed before winter, he said, for two reasons.

First, as temperatures continue to drop, federal regulations require that the ground be heated in order to pour the concrete for the sidewalks, something that is “too costly,” he said. Second, due to limited manpower in the aftermath of Hurricane Sandy, NESEG has informed the village that it cannot schedule the removal of power poles until spring. The poles must be taken down temporarily for the sidewalk work to proceed near the Ten Broeck Street area.

One resident living in the sidewalk project area expressed concern to the Village Board that the new sidewalk curbing may divert additional water flow onto his property during heavy rains, possibly damaging his home’s foundation and flooding his basement. Mayor Ernie Martin said he was waiting to hear from the village engineer, Chasen, to review the situation. Martin said the curbing near the man’s property is part of the sidewalk project that will not be installed until spring.