The Experience Stillwater Committee is proud to present the updated Millennial Miles walking tour. This walking guide will take you to some of the Village of Stillwater’s most historic structures, some dating back to the early 1800s. You will start at the north end of the Village, walking south along Hudson Avenue, before looping through the backroads around to the starting point of the tour.

This web page will feature extended content, including additional text, images and, in some instances, audio from local people recalling the historic uses of the old buildings and everyday life in the Village from previous generations. Check back in the future as the content continues to grow. 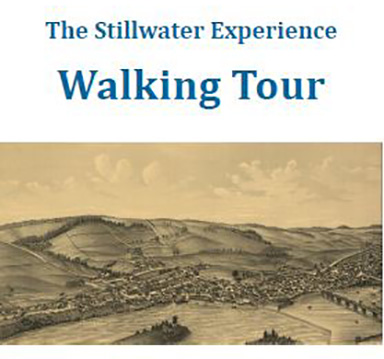 Prior to 1808, this elevated area was referred to as Up-Town. It was later renamed Upton and is referenced in many historical documents.

Named for the first known schoolmaster in Stillwater. Master Walter Broughton also served potables at a nearby tavern.

841 Hudson Ave: Originally built to serve as a boarding house for canal builders as they dug the ‘Schuyler’s Ditch’ canal in the 1790s. It was the northeast land lock.

4 Ferry Lane: View of the former residence of Cornelius Vandenburg and ferry circa 1732. Residence was the station of Underground Railroad during the Civil War period. Ferry is infamous for transported captured British troops toward their prison camp in Albany.

There once a covered bridge that spanned the Hudson River at this location. Fleeing thieves burned it in 1899, and many buildings were lost in the ensuing conflagration.

781 Hudson Ave: The largest hotel in town stood at this site. It boosted a second-floor ballroom where many posh events were held at the turn of the century.

756 Hudson Ave: Former residence of Samuel Eddy built in the 1890s. The Eddys were a merchant family in Stillwater. A barn on this property was used for storage of “Anthony’s Extracts”, manufactured in Halfmoon when Josh Anthony occupied the house in the late 1800s. The similarity between the Eddy barn and the buildings at the Anthony Spice Factory in Halfmoon is striking.

747 Hudson Ave: Built in 1860, this was originally the Second Baptist Church. In 1997, the congregation commemorated 50 years of the Federation of Three Churches.

740 Hudson Ave: Formerly the Percy House, the hotel was built by Harvey Hewitt in 1901. It included a large banquet room, and had a windmill in its backyard that pumped hot and cold water. Once, a widely known inn and restaurant stood at the site. It was a large colonial-type white building built in 1846 and called the Andrew Hunter Hotel. In the 1890s, at the height of Stillwater’s prosperity, it was the summer home of many wealthy vacationers.

712 Hudson Ave: Former site of Mr. Palmer’s grist mill built in 1773. At the height of the Industrial Revolution, Palmer purchased a great mill stone that was imported from France. The grist stone was noted for being the best anywhere in the Hudson Valley. The stone is now buried under the roadway near the intersection of Hudson Avenue and Lake Street. Other manufacturing mills surrounded Palmer’s factory. Mills for grist, saw, carding and fulling mills, lumber, bricks, paper, and knitted yarn were manufactured in Stillwater.

692 Hudson Ave: A replica of a fortification known as Fort Ingoldsby, which was commissioned by Col. Peter Schuyler in 1709. This fort was for military use only and was left untended until 1756 when it was rebuilt by General Winslow on his northern expeditions. According to some sources, the fort, renamed Fort Winslow, was occupied for the last time during the American Revolution when General Horatio Gates made it his headquarters for a few days in 1777.

687 Hudson Ave: Site of the large mansion built in 1848 by Ephraim Newland, and later owned by Dr. Hudson. He was a popular physician that met an untimely death in the early 1900s when he fell to appendicitis after curing so many residents from the influenza epidemic.

662 Hudson Ave: Formerly St. John’s Episcopal Church, built in 1874. The Stillwater Free Library and Historical Society acquired this building in 1959 and it became a library in 1960.

651 Hudson Ave: Theodore Baker built this unusually shaped mansion in 1859, according to the owner. Mr. Baker was a well-known carpenter/home builder in Stillwater. Its unusual shape is attributed to the fact that Mr. Baker feared restitution from the devil and believed the eight corners protected him.

645 Hudson Ave: This was the site where General George Washington rested overnight as he visited the family of Rensselaer Schuyler. Once the Schuyler mansion was removed, multiple residences were built.

3 Nielson Ave: Located directly behind the Quade Building, this was the site of former stables, a blacksmith, and related hardware items for sale.

1 Lansing Road: Presently the location for the Town of Stillwater Highway Department, this site once hosted one of the largest railroads and trucking business in the area during the Industrial Revolution.

23 Nielson Ave: Situated on the edge of the Schuyler Creek, Bliss Neilson operated a prosperous mill. Artifacts of the first stone are still visible.

A natural spring-fed creek that flows east into the Hudson River. It originates at Little Falls, a popular childhood stomping ground located in the higher elevation of Stillwater’s farmlands.

1 American Legion Road: The American Legion’s Post #490 was the former site of the Civilian Conservation Corps Camp that was operational from 1939 to 1941. The C.C.C. troops constructed much of the roadway through the Saratoga National Historical Park, and the Village municipal waste water collection and treatment system.

24 Lake Street: Turn of the century home still owned by the family of Dr. Plynn M. Bolton, an area physician who practiced in Stillwater and Mechanicville in the early 1900s. Doctor Bolton passed away in 1932.

19 Palmer St: Presently the Stillwater Area Community Center, this is the site of the first multi-roomed schoolhouse in Stillwater. It was built in 1925 and remained a vital part of the centralized school system until the late 1980s.

28 Champlain Ave: This is the early home of Chauncey Dickenson Bull, a family physician who practiced over 50 years in Stillwater during the early 1800s.

Opened in 1830, the Champlain Canal was originally operated by mule-drawn barges. The six-foot-deep canal ran 64 miles, leaving the Hudson River at Waterford and then rejoining the Hudson in Northumberland. Most travelers and manufactured goods took advantage of the canal as a means of transportation during the height of the Industrial Revolution.